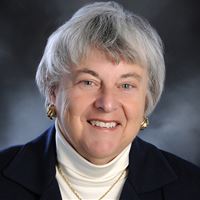 Former senior official in the Dept. of Treasury and Commerce, expert on US budget, tax and trade policy, Colonial historian, and author.

Currently Visiting Professor at the College of William and Mary, teaching graduate course on the U. S. budget. Formerly Deputy Assistant Secretary of Commerce for Trade Information and Analysis in the U. S. Commerce Department and international tax specialist with the US Treasury. Vice President for Government Affairs with the Electronic Industries Association.

Dr. McLennan holds both Ph. D. (Wisconsin/Madison) and J.D. (Georgetown) degrees, has published more than half a dozen books and many studies and articles on tax, trade, budget, valuation and economic development subjects. She has received numerous academic and government awards.

Dr. McLennan currently serves as docent at Jamestown Settlement and assists the historian at the new American Revolution Museum at Yorktown.  Her last two books, The Wealth of Jamestown and The Wealth of Virginia are historical novels that take place in the 1690-1720 period, illustrating the developemnt of Virginia as a trading and self-governing colony.

Economic anlysis of various industries in connection with valuation and transfer pricing requirements of the US tax code. Analysis of tax policies of large corporations, domestic and foreign, with regard to valuation of intangibles and their foreign taxes.

Deputy Assistant Secretary of Commerce for Trade Information and Analysis

US Department of Commerce

Directed staff of over 100 to provide data, research and analysis of international trade.  Departmental coordinator with CFIUS and EXIMBANK. Respresented the US to the Industry Committee of OECD (Paris) and  the Working Group on Trade and Investment data, APEC (Singapore and Tokyo).

The Wealth of Jamestown

Historical novel about Virginia in the 1690s. The characters include Sarah Harrison, daughter of one of the colony's richest planters, James Blair (Sarah's husband and Commissary of the Church of England and founder of the College of William and Mary), and William Roscoe, Sarah's lover and business partner. The poltics and growing wealth of the colony serve as background for a story of romance, violence, and high politics.

The Wealth of Virginia

Virginians introduced in The Wealth of Jamestown go to London to try to remove a governor.  They meet the Board of Trade and engage in high and low politics.  A story of romance and violence, this time set in the old world.

Memoir recounting McLennan's experience as the only congressional staff member to work on Pres. Reagan's first budget and first tax bill, serving in both House and Senate. The book includes decscriptions of  her experience as member of the Treasury Committee that prepared Treasury One (the study that supported the 1986 Tax Reform Act) as well as her experience as Deputy Assistant Secretary of Commerce for Trade Informationa and Analysis.  Dr Mc. Lennan represented the US to a number of international organizations and wrote a piece of Treasury One.

Provides lectures and answers questions about early American history at the site of the first English settlement in North America.

Virginia Asian Advisory Board to the Governor (Economic Empowerment)

How do you think the current affairs of government compare to those in historical times?

You've had an inside view in the inner workings on government having worked in the government and you must have a historical perspective having written a historical novel about Virginia in the 1690s as well as others. How do you think the current affairs of government compare to those in historical times?

The major issues facing governments in the early colonies are mirrored by today's debates.  They were mainly budget and defense. The parties favoring a strong defense expected someone other than themselves to pay for it. There was never enough money to fund what they wanted, and they resisted raising taxes.

In colonial Virginia there was a constant tension between the executive (the governor, appointed by a Board in London) and the elected legislature.  Good government required that the governor get along with the assembly. If he didn't the House of Burgesses and the Governor's Council (all Virginians) found a way to get rid of him.

See my two historical novels, The Wealth of Jamestown and The Wealth of Virginia for examples of how politics was conducted in early days.